“‘So far so good,’ said she, when I had ended my story, ‘and now pay attention to what I am about to tell you […]
First you will come to the Sirens who enchant all who come near them. If any one unwarily draws in too close and hears the singing of the Sirens, his wife and children will never welcome him home again[…]


Therefore pass these Sirens by, and stop your men’s ears with wax that none of them may hear; but if you like you can listen yourself, for you may get the men to bind you as you stand upright on a cross-piece half way up the mast, and they must lash the rope’s ends to the mast itself, that you may have the pleasure of listening. If you beg and pray the men to unloose you, then they must bind you faster.” 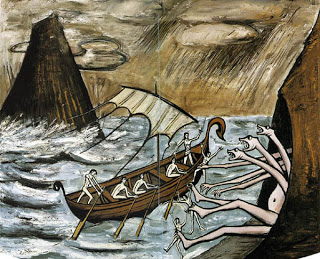 From sparknotes:
“Once they have passed the Sirens’ island, Odysseus and his men must navigate the straits between Scylla and Charybdis. Scylla is a six-headed monster who, when ships pass, swallows one sailor for each head. Charybdis is an enormous whirlpool that threatens to swallow the entire ship. As instructed by Circe, Odysseus holds his course tight against the cliffs of Scylla’s lair. As he and his men stare at Charybdis on the other side of the strait, the heads of Scylla swoop down and gobble up six of the sailors. Odysseus eventually escapes and landing on the island of Thrinacia.”

Let’s consider an alternate scenario: We will assume we are back in ancient times. We will pause the story and concentrate on those six poor men, that history has so brutally ignored. Maybe they were not instantly killed. Maybe there is a sub-story that we have ignored.

Scylla, which in Greek literally translates to female dog (a.k.a. , “b….”) was a 6 headed monster. Let’s assume that one of the heads fell in love with one of the sailors and after a furious fight with the rest of the heads, it kept the sailors alive. A clear case of multiple personality disorder… 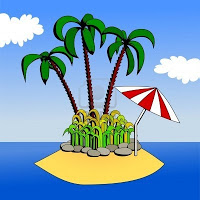 The men were thrown unconscious to shore. They found themselves in a small sunny island full of coconuts and bananas, rabbits and friendly monkeys and plenty of dumb fish to feed a small army. For many years they lived happily.

Until one day, a talking monkey appeared. He befriended the oldest of the 6 friends, Peter. The monkey and Peter would talk about all kinds of things. Interesting things. One day the monkey noticed that Peter and his friends carried all their produce back and forth to exchange it. The monkey has an idea:  Instead for exchanging fish for rabbits, they would use coconuts in exchange for everything. So instead of 10 fish = 4 rabbit = 1 monkey they would use coconuts. For example 1 monkey =100 coconuts, 1 rabbit =25 coconuts, etc. Per the monkey’s instructions, they created an open pit where they brought and sold their goods which they called the “market”.

But the monkey did not stop there. It started visiting the other 5 survivors and convinced them that Peter was very very smart. He advised them to follow Peter’s actios. If Peter bought rabbits, they would also buy rabbits. If Peter bought lots of fish they would also buy lots of fish. One could say that the monkey had some kind of magical power as the survivors followed blindly Peter’s actions. No questions asked.

Soon, Peter had all the produce and his 5 shipmates starved to death. Peter, who was now nicknamed “smart money Peter”, went on to live a few more lonely years before he died in the arms of his one and only friend: The monkey. He now stood silently on top of the six graves. He didn’t cry. He only grew taller and taller and larger and soon stood at the height of the Gods. He was Haedes the God of the Underwold (also known as Ploutos, which in Greek literally translates to “Wealth”).

Like many of the Greek gods, he too enjoyed shape-shifting and toying with the mortals.
Maybe Odysseus managed to get away. But he did nail these guys!

With a swift and powerful motion he opened the gates of hell and descended back into his dark kingdom. The deserted and barren island stood as proof of the game Ploutos played on these 6 friends.

Part 3: How the hell can we loose in the Market? 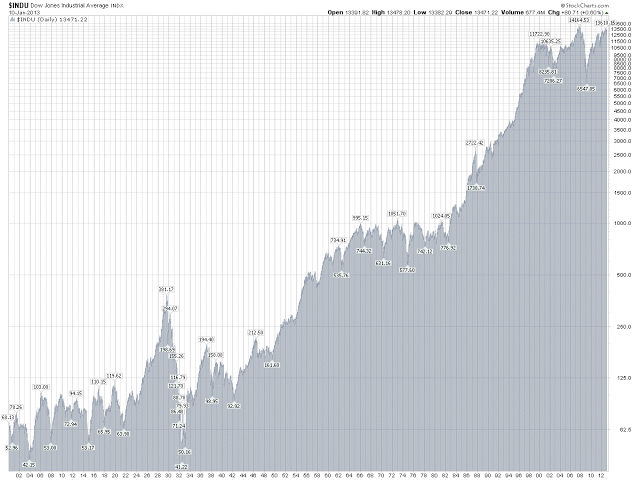 Statistics show that most retail players loose in this upward-bias game.