If someone asked you to sell Puts on the SP500 and hold to expiration, when would you sell them? On a correction or a bullish breakout?

This is a strategy that I came about by accident. I actually meant to do the exact opposite of what I ended up testing…  I can’t say I would trade this as-is but there are some lessons to be learned here, at least for me.

When SPY makes a new 15-day high, sell a next-month out-of-the-money PUT.
Pick the farthest strike whose corresponding option price is larger than $0.60.
So if SPY trades at 140, we would try selling the 125 strike. If it’s priced at $0.10, we check a higher strike, i.e.,126, 127,128… until we get to a strike whose option price equals or is greater than $0.60.
If the option looses more than 30% of it’s value at the close of the day (not intraday), we sell it on the next day at the close.
Otherwise hold to expiration. 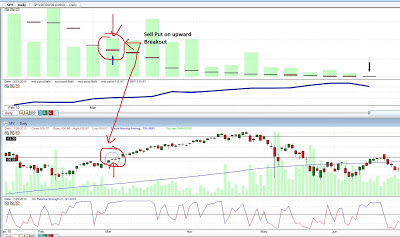 Just to get some context:
You need to contrast the above chart to the typical Put-selling strategy. High win ratios (i.e., winners > 80% of the time) but when we have loosers, they are usually huge ones.

Thoughts and Conclusion:
Having tried different versions of strategies that sell naked options, I can say that I would recommend against it. And if you must, please try to somehow backtest the strategy first.
My results have been mediocre at best. The risk of being short an option is just too massive. One loss may cripple months of winning. Stops may help but they tend to level the winning ratio and often cause multi-year flat equity curves.

Another conclusion is that complex option strategies can be thought of as  multi-strategy (MS) systems. In other words, a Buy-Write strategy, where one buys SPY and sells a call against it is nothing more than:
Strategy 1: A (very simple) long only  SPY stock strategy.
Strategy 2. A (very simple) short only call strategy.

Similarly, an Iron Condor is a simplified 4 strategy MS system.
All this is still work in progress as other factors like early exercise are being looked at.

What is interesting about the above strategy is that :
1. It’s not intuitive (to me at least) that one would sell Puts on Bullish Breakouts*.
2. It limits draw-downs by not triggering unless we have a breakout on the long side. So if the market falls and keeps falling, this strategy stays flat.
3. A 30% stop on the option is a very tight stop. It means that  even a small move against us will immediately trigger an exit. On the other hand, by exiting on the next day close, we take advantage of mean-reversion. So if a 1% move down of SPY triggers the exit, chances are the next day will be an up day and we would sell (cover actually) at this up day’s close.